Each day I have setbacks from the social media rumor that was and is an odd goal that any human being or person would get fame and fortune if you made Jennie Nawrocki angry sad or depressed. While it seems to have slowed since people are where they wanted to be regardless of how they got there I will never forget they pain they made me feel. You do not know the lengths they have gone just to see me freak out in public. There is another song out that says I know you won’t be able to hear the lyrics because you are laughing so loud. What makes them laugh so much seeing me cry or be upset about the hell they gave me that day. The insensitivity to my needs no longer shocks me, I expect it and realize this is my future. Some said they wanted me to learn to fight or show some super power. What did I want to do be a disciple of God who just spreads love. I know I will never be the level of the Dali Llama or Pope but it was like someone making a game out of who could make them punch someone. I don’t like fighting and never have. I have done my fair share of screaming but that is where it mostly ends. I also know the double standard that I have seen people hurt with no punishment but if I at any moment was aggressive and inappropriately touched someone I would be in the clink faster than I could type this blog. It is a weird feeling when you meet someone and you don’t know how they are going to screw up your day but you know it is coming it has to it is in the rule books. This has left me with the ability to trust no one and worry or be anxious about everything and everyone around me. I have been lied to so much by even my family that I prefer to be alone. I hate it because I lost all my family and friends. What would you choose be around someone who is going to try and piss you off and ruin your day any way they can or be by yourself in isolation? Well I was given both. Isolated by who I can speak to, what I can read, and where I go and any future interaction is full of anticipation for the next bit of hell and torture I get to endure.

When someone tells me I choose my happiness I tell them really after I have been told to die or money was stolen or knowing the next person will steal my identity yet again. To this same person I wonder if they would just sit there and just smile as you are being told you are a mother ******. It is a lot to bounce back daily. There are times I have thoughts of a better day but soon and it is guaranteed that someone will squash it immediately. Some theories are out there that I can read minds, am telekinetic and have some control of the weather. Of course it is going to be denied that I have special powers or that someone has been playing mind games with me. Let me tell you this, I know and have been told by a student no one will ever believe what you say. I have seen it time and again just like they will tell you everything in this blog is a load of crap and never happened and will never be spoken of again if not used to ridicule but I will still tell my story as long as I can.

However she also knows she is not in control of her future because my phone has and is hacked. Most of the passwords I had forever were change internally by others. My tv and phone go slow or kaput when certain words are said. I can’t get a job or money. I am called every bad name in the book and my twitter feed is completely controlled. Take a look at this screen photo. The time says 7:35 at the top but the source retweeted a tweet made at 8:14 am 35 minutes ago. So I know they are good reporters but when I see this just waking up reading the news I know something is askew. I have been known to go on different computers and look at the same timeline between my iPad and phone and they were different.

But what that timeline says to me I am isolated by the information I receive and it is that way for a reason they want results negative results so I go so crazy nuts and psychotic screaming violent behavior. It is my controlled environment my life I am given to live. What they haven’t figured out or maybe they have the more they push me to be negative the more I curl into a ball and say “NO”. It is the only control I have at the moment. 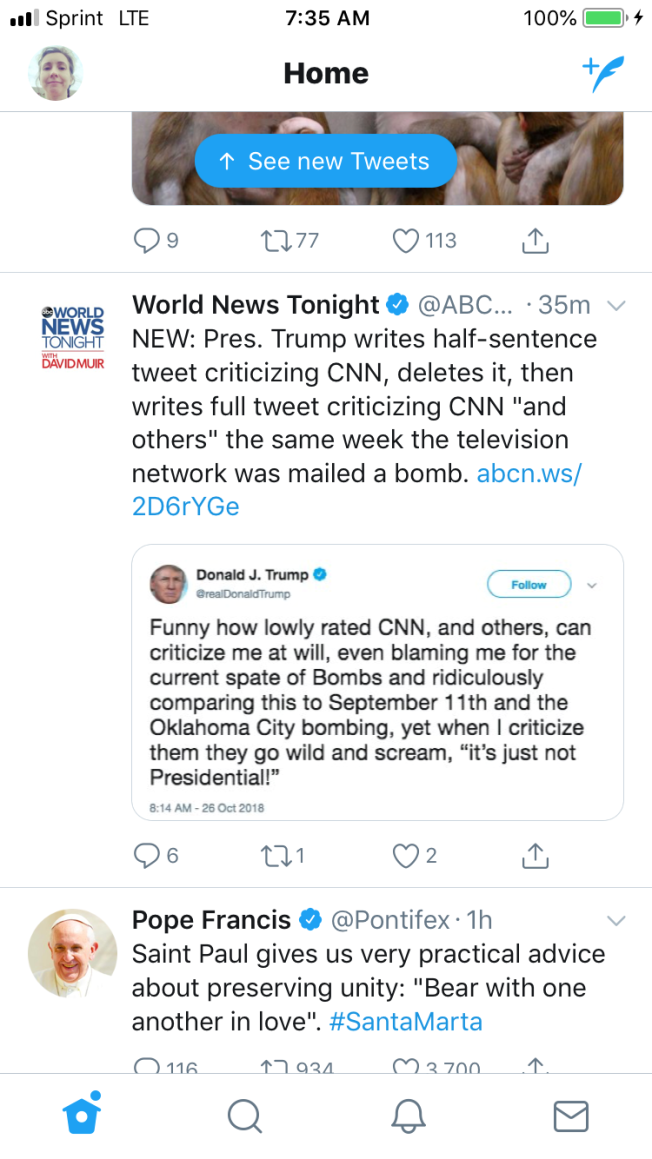 Tomorrow it’s all a dream and or mental.